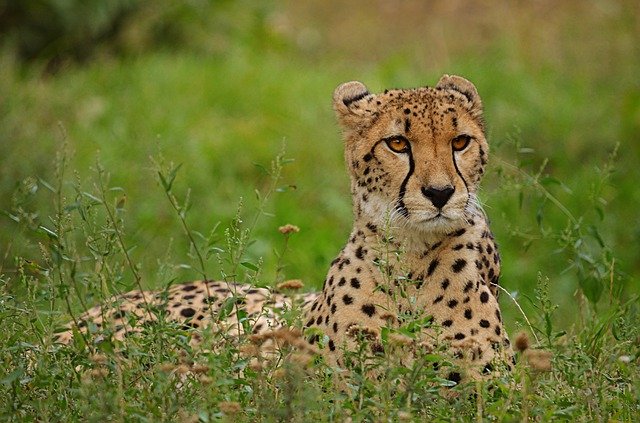 We count ourselves really lucky when we see these guys as there are only around 7,000 cheetahs left in Africa! Fortunately, on our safaris to the Central Kalahari Game Reserve, you may encounter one as this reserve has some of the world’s best cheetah viewing opportunities.

Behaviour: Normally solitary, the cubs stay with their mother until they are about a year old. Often live in small groups with strong social bonds. Males hold territories for a long time or they are nomads. They mark their territories by spraying urine. Diurnal, hunt during the day especially early morning and night. Also, hunt in bright moonlight. They do move through game fences on occasions.

They watch from a vantage point and look for the least vigilant fringe animal and charges from within 30m. Hunts mostly in the open but will hunt in cover. It prefers small antelope species about 60kgs and below in weight, rodents & hares. Can go from 0-70km/h in 2 seconds. Can run between 100-120km/h, but can only keep it up for about 600m, thus it is the fastest land mammal over a certain distance. The cheetah trips its prey with its dewclaw. It can’t chew through hide & bone so it feeds from the groin and will eat carrion. Eats about 3kg’s of meat per sitting. Prefer open grassland areas, but frequently will be found in lightly wooded savannah.

Breeding: Male detects if the female is on heat by sniffing her urine, courting lasts for about a week. Mate less than other cats. Gestation is about 3 months. Cubs are born altricial and are moved around for about 2 months. They eat solids after about 6 weeks, they’re weaned after about 3 months and at about 5 months the mother brings them live food.

Info: The name cheetah comes from the Indian word ‘chita’ meaning ‘spotted one.’ Rare and totally protected they were extinct in natal in the early 1930’s, but stock from Namibia was released into Hluhluwe & St. Lucia later on. King cheetah are not a different species but a natural gene phenomenon. Can be found in the Kruger National Park. Cheetahs are part of the family – Felidae. They have a digigrade foot structure, retractile claws (cheetah is the only true cat that can’t retract its claws) & round heads. Cats have superior binocular, colour vision which adapt to the darkness quickly, they also have sharp papillae on their tongue & carnassial teeth. Their life expectancy in the wild is around 16 years.